It took me one hour and forty minutes to get through the line, but I voted. Sure, I live in a state where my vote likely won't make a difference, but I voted. In my precinct, there was a vast disenfranchisement campaign against people whose last names begin with L-Z, but I voted.

I figure the good turn-out--nay, the best turn-out I have ever seen in these parts by the longest of shots--is good news, because as I walked through my precinct to the polls, I saw this: 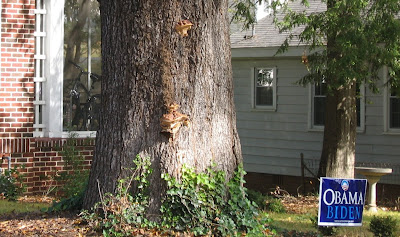 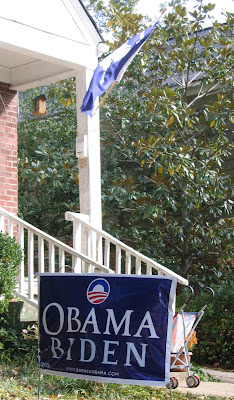 Notice that that last house is so excited about Obama that they have 2 signs!

As I was taking these pictures, a guy walking down the street started yelling at me: "Hey lady! Are you out taking pictures today?"

GWDTS: "Take a picture of me!"

Me: "Really I am taking pictures of Obama signs. Did you vote?"

Me: "I think he has a real shot at winning."

GWDTS: "Well, we sure need a change!" [I revise my opinion about whether he voted.]

We could not get a sign, but we did commission our nextdoor neighbors' kids to make us one: 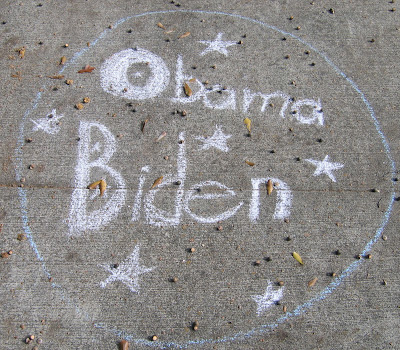 There is one house in our neighborhood that has had a BARR/ROOT sign in their yard for a long time, but recently they added another: 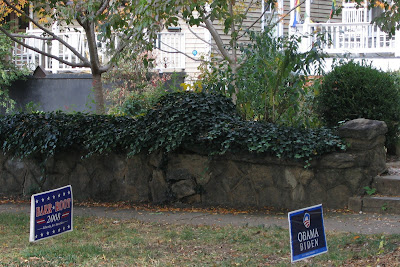 Is this a house divided? A conflicted voter? Is someone settling?

Standing in line at the polls was kind of a party. Everybody was surprised to see lines this long, or at all, since that never happens here. Besides, something like 12% of the registered voters in SC had already voted. There were two lines, depending on whether your last name started with A-K or L-Z, and the latter was far longer--too bad for me, because I am not registered as "Isis." By coincidence, I arrived at the polls about 2 minutes after the PP, so we waited in line together. We saw at least a dozen of our neighbors. When I got to the line, a neighbor who is a part of the A-K elite was just realizing that he could leave our long line for the shorter line, and he finished voting about an hour before us, including the time he spent standing around and chatting afterwards with the likes of us. He claimed that the A-K people are smarter and actually control the world, or at least the election commission. I pointed out that some other friends of ours, who had voted earlier that morning, and are also a part of the A-K bloc, had found their line disproportionately long. So now we figure that the A-K people just tend to get up earlier.

There were signs everywhere about how you cannot wear political attire or carry political banners into the polling places, or attempt to influence people's votes there. The PP wondered whether, since trying to influence my vote would be futile, there might be an exception. I asked him to please note that the sign did not distinguish between futile or promising attempts.
There was no one on the ballot for Soil and Water Commissioner--yes, no one--so we had thought yesterday about writing in the PP so he could take the job. But then he realized that it might be a bigger job than he would want, so we decided to write in a neighbor who is also a water guy. I decided today that the PP would just be too good not to try to elect him. I guess we were inside the polling place (still waiting in the L-Z sign-in line) by the time he asked me who I was voting for and I told him him. He said no, I was supposed to vote for our neighbor, but I told him to back off since it was illegal for him to try to influence my vote inside the polling place.
I suppose given how long the wait was that it was no surprise how many cranky children there were inside the polling place. I came to suspect that the one screaming child was actually giving voice to all of our fatigue, frustration, and sore backs. But as this screaming child was wheeled out the door in its pram, the PP asked, "Why does that child hate freedom?"
There was a bit of a scare at one point because the polling place ran out of "I voted" stickers. We had already been waiting about an hour and twenty minutes by this point, so we really wanted our damn stickers, because why would you vote except to get a sticker? But luckily they found some more, so by the time I actually had voted, I got my little sticker.
I cannot even explain to you how much I love voting. There have certainly been other years in which I really really really wanted my guy to win, but man oh man THIS year I really want it. Like, a LOT. But it is not just that: I am a big sucker for democracy. I believe in giving a voice to everyone, whether they do the work to be informed or not. I love seeing people come out to vote. And this year, I loved seeing older and disabled voters still getting themselves to the polls to vote in this historic election. I got a chill when I cast my vote. And I am still proudly wearing my sticker.
Posted by Isis at 11/04/2008 03:04:00 PM

it's awesome that there has been this "problem" of long lines all over... people taking a greater interest in public issues is always a good thing

The thing that I appreciated about the folks standing in long lines was their patience and willingness to wait it out to exercise their right.

I love voting, and I love your last paragraph.