So when we got up this morning, after the tea and coffee were made, the PP said, "I want to know what happened with the tornadoes." So I went outside and got the paper, brought it in, and as I was pulling it out of its plastic baggy he said, "So does it say, 'Tornadoes slam Upstate'?"
I kind of looked at him, because what it said was TORNADOES SLAM UPSTATE.* 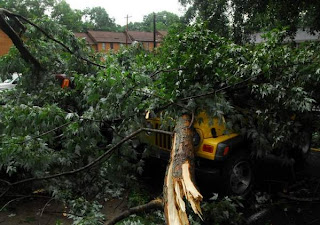 Note this part in particular:

Trained weather spotters reported the first tornado on the ground in Clemson at 2:54 p.m., according to the National Weather Service. The tornado "came across the stadium and the intramural field and took out a couple of light poles and then blew over trees in front of the ESSO Club moving into town," said Marvin Carmichael, Clemson’s director of Financial Aid. Tornado sirens at Clemson University were activated and the CU Safe Alert text-messaging system warned people to seek shelter, said Clemson spokeswoman Robin Denny.

I would not want to disagree with Robin Denny, who makes it all sound so smooth, but I need to add a couple of amendments.

You see, this CU Safe Alert system has had some issues. For a while, they had it set so that the sirens went every time there was lightning "in the area." Last spring break, when I was at the beach, I got a series of 10 text messages telling me to seek shelter from Clemson lightning.

And let me describe the siren: it is a regulation siren that goes for a while, leaving you to wonder what the disaster is. (This is a siren that was put in place after the VA Tech shootings.) Then a scary recorded voice identifies the disaster and uniformly advises everyone to "seek shelter immediately." That voice, however, is not at the same volume as the siren, which means that in (say) a classroom, you can hear the siren, but not the explanation.

I note this because, in fact, I was teaching at 2:54 p.m., when the storm and sirens came. We were (surprise) discussing a poem when the sirens went, and I realized to my dismay that I had no idea what to do. My first thought:

+ Is this yet another lightning warning, so we should do nothing?

Then when a student checked for a text message and learned of the tornado warning, I thought:

+ Does the university have a plan for serious weather that I did not know about?

+ Should we use the stairs to go downstairs (my classroom was on the fourth of four floors)--stairs that are outdoors and exposed to those same elements from which we were supposed to be seeking shelter?

+ Should we line up in the hallways with our heads between our knees, or should we seek shelter under our desks, like if there was nuclear fallout on the way?

+ Will something horrible befall my students if I make the wrong choice?

Looking around to see what other classes on the hall were doing and seeing that they were continuing, I decided to go ahead with class, but I could see the anxiety on my students' faces and frankly the discussion sucked.

Afterwards, I learned that most of my colleagues who were not in class at the time were huddled in the office of the person with the best view of the tornado as it ripped across the stadium and the intramural fields, checking out the view. At some point, it apparently occurred to them that perhaps the 8th floor of an 8-story building--and by a window--might not be the place to be, so everyone took the double-helix stairs down to the basement.

And after that, I learned about the damage on campus and in the neighborhoods around campus.

But me and my students, we were still talking about Yeats.

Back in my office, I saw the "all clear" signal, which had come through at about 3:10. So I went ahead and convened my 3:30 class. During that class my students were seriously spooked, since they (unlike my first class) knew that there had been a tornado, and were on the lookout for more. "That tree is horizontal," one of them said at one point, looking out the window. "There is debris flying in a circle." It was also raining and windy as all get out, and I figured the likelihood of another tornado was small, so we kept going.

But after that class, I went back to my office to find another "all clear" signal given at 4:10. There had been no additional siren, no additional text messages warning of danger. So were we not really all clear at 3:10? Had the system malfunctioned?

This morning in my inbox was a message received at 7:49 p.m. but date-stamped at 3:50 p.m., reading, "Tornado Warning: Seek shelter and tune to local media for information." That would explain the 4:10 "all clear"--but why had this message not come through at the time?

Frustrating. And a little scary. I suppose they are working the kinks out, but I hope someone is paying attention. 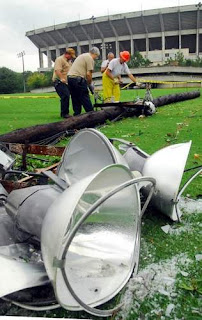 So yesterday, as I was sitting through a seemingly interminable meeting at work, someone said: "Well, we would deal with that, but the entire Blahbidiblah Committee is pregnant."

This comment through everyone off for a while, because although a couple of people in our department have recently had babies, it is not obvious that others are pregnant. I just thought that maybe I had missed the exciting summer developments, being out of the country. But it turns out others were as confused as I, and the whole discussion jumped its tracks as we all tried to remember who exactly is on the Blahbidiblah Committee and then ascertain whether (through medical miracle or not) they are pregnant.

It turns out that what the commenter meant was that "the whole" (i.e. a couple members of) the Blahbidiblah Committee are on maternity leave, having recently had babies.

Which, at long last, leads me to my question: Do we have a good concise adjective to describe someone who recently gave birth? I briefly considered "postgnant," but the "stgn" consonant cluster is uncomfortable in English.

Greetings from somewhere over the Atlantic.

I forget who it was who described jet-lag this way: as if your soul is lagging behind you, unable to keep up with your jetliner, hoping someday to meet up again with your body. By that math, my soul is probably somewhere over Greenland, at best.

So it is 4 a.m. EDT, and I am feeling like it is time to get up and have breakfast. Even the melatonin I took before bed is not counter-acting this.

And have I mentioned it is a little warmer here in South Carolina than it was in Sligo, where I spent the last two weeks?

Nevertheless, it is great to be home--to have slept (if not long enough) in my own bed, to have spent a quiet evening in with the PP and our darling (if adorned with teeth and claws) cats, to have feasted on tomatoes and basil from our garden, to have watched some Olympics on a big flat-screen TV I had forgotten we had bought, to have begun the process of unpacking.
Posted by Isis at 8/12/2008 04:32:00 AM 1 comment: