I am now about 1 ball into my Fair Isle Yoke Sweater. Since the sweater is worked in the round starting from the bottom edge, that means I have completed about an inch and a half of ribbing and a bit of plain knitting. I have something to say later about that ribbing, but today is dedicated to thinking about color patterns.

To order the yarn for the pattern, all I had to do was decide which colors I wanted, since each of the colorwork colors (for the yoke) requires 1 ball. And even though a couple of the colors looked a little different from how I had hoped (the "Rose" a little pinker and the "Seabright" a little more teal), they all go together pretty darn well.

So then the question was: which color goes where in Elizabeth Zimmerman's Fair Isle chart? The design has three tiers (A, B, and C) to account for decreasing stitches). I was having a hard time imagining the different options, so I pulled out the colored pencils and graph paper.

I mocked up two versions. This was the first I did: 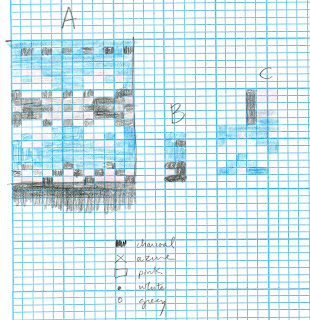 Bear in mind that the blue lines of the graph paper add a somewhat confusing element. Also, on this scan (or monitor), the pink is pretty hard to see. Still: perhaps you can tell that there is a lot of blue in that design. And really? It is more blue than I wanted, since I envisioned the blue and pink as little flares of color in a largely grey sweater.

So I mocked up another option: 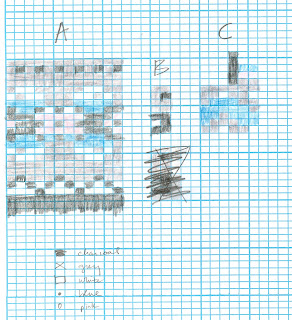 (Please ignore the crossed-out failed first attempt at Section B.)

I like this one better: the grey (which here looks a bit pinkish), white, and charcoal will dominate the sweater, giving it a "shades of the same color" feel, with little bursts of blue and pink.

The Opinionated Knitter in 2011. 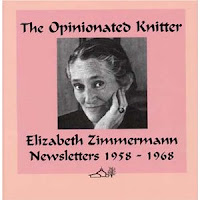 Over on ravelry, an "Opinionated Knitter KAL" has begun, beginning, well, at the beginning. Elizabeth Zimmerman's The Opinionated Knitter compiles her self-published newsletters from 1958 to 1968, and the pattern from Newsletter #1 (mailed in September 1958) is the Fair Isle Yoke Pullover.

For those of you who are not knitters, Elizabeth Zimmerman is a genius. Unlike many designers of her era (or of the present, for that matter), she aimed to make knitters more capable by asking them to do a little math and think a bit. I read somewhere that while most designers assumed that women can't do math, EZ assumed that they could, which, of course, we can. And we are not talking about quadratic equations, for goodness sakes! (At least not yet.) The challenge and the pleasure of her patterns is that they do not give line-by-line directions, but rather assume that you, being a knitter after all, can figure out what she means. Throughout her many books about knitting and every single pattern is this wonderful sense of her voice--as though you and she are having a little chat about knitting. And what knitter among us does not fantasize about chatting with Elizabeth Zimmerman?

These newsletters were edited by her daughter Meg Swansen, a knitting genius in her own right, and the heir to Elizabeth Zimmerman's Schoolhouse Press business and knitting reputation. Along with facsimiles of the typed (and presumably mimeographed?) newsletters are Meg Swansen's comments and suggestions, making connections between these particular documents and patterns and EZ's wider corpus of patterns, discoveries, and innovations.

I was initially nervous about starting with a Fair Isle sweater. I have done a number of stranded projects, but never anything sweater-sized, and because I do not feel that my two-handed gauge has evened out, I am worried about how the stranded part will look. But hey: there is no time like the present to work things out--I mean, to take a little risk with the knitting.

I ordered some Shetland wool from Schoolhouse Press for the project: this is a smidge tricky, because there is no color card for these yarns, and one is never sure how accurate a reflection of the actual colors the online pictures will be. So my blue and my pink are both a bit different than I expected, but they will work and look good together. 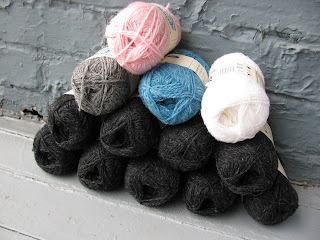 I am not sure whether I will need to order some more of the charcoal. EZ's pattern is for a 36" chest, and I am making mine as a 38" chest. But we'll see.

For the Fair Isle Yoke Sweater, MS suggests adopting some of EZ's later discoveries, and I am planning to incorporate the short-row shaping for the back (in order to make the back of the neck opening taller than the front, and so more comfortable). I am also considering incorporating a bit of waist shaping, but I am not sure yet about that.