I got a mysterious package today. Well, not that mysterious, since it came from my parents, but still: once I removed the brown paper wrapping the box, I found a note in my father's handwriting, reading "O DARN!"

Now, historians of my family know that my parents have a tendency to stow Christmas gifts away during the year and then forget them at Christmastime. I confess--as I grow older, I am finding myself committing this same error, having mailed gifts to my inlaws prior to discovering a secret secret stash of other gifts.

So I assumed that the exclamation on the box's exterior meant that this problem had occurred yet again.

Instead, I found this: 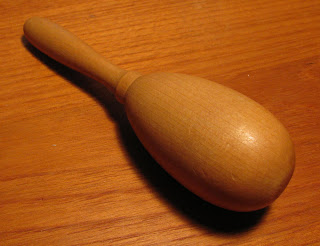 The Patient Partner and I stared at it for a while, wondering if it was a silent maraca, or some kind of massage tool, and then I remembered that over Christmas my father had mentioned that he had, leftover from my grandmother's sewing box, a darning egg.

Having become a rather intense sock knitter in the last year--15 pairs completed in 2009!--I already recognize why darning is valuable. In fact, because I did not know that walking stocking-footed in the house wears socks out faster than anything, I have already worn through the heels on the first pair of socks I knitted.

(The Patient Partner and some of my older pairs of shoes will attest to the fact that I have a very heavy step, all that force occurring on the heel.)

Luckily I have got yarn left over from most of my pairs of socks, so I could even darn them in the yarn in which they were made. And now I even have the proper tool.

In hopes of learning how exactly this device is used, I looked up “darning egg” on the internet, and I learned from Wikipedia that in addition to darning eggs, there are darning mushrooms and darning gourds. But I was hoping for photographs to help me understand better, and I came across “FluffyKnitterDeb,” who posted this great tutorial.

Granted, that is for using the darning egg to finish toe-grafting—and I like what she is suggesting!—but I still wanted to know how to use it for true darning. “Frugal Families” came to the rescue!

It turns out you can still buy darning eggs, but I am glad to have one that has been in use for generations.