As I have been ripping all my CDs (People, this is a BORING task), I have been really impressed by the capabilities of the Gracenote music database that the Creative MediaSource Organizer uses to get information about a particular CD so that you don't have to type it all in yourself. And you do not want to type this information in yourself, particularly since, on the Creative software, the tab key does not move you from field to field.

Anyway, I kept thinking I would stump the database. Surely some of my obscure Italian CDs would get it, I thought. Wrong. Or how about some of those albums of electronica that I bought in the little music store in Birmingham (not Alabama) where most of the stuff was sold on vinyl and, true to the cliches of High Fidelity, I was the only female in the store? Nope--it has those too. OK, now this one would have to get it: the CD of Traveling Wilburys , Volume 1 that one of my colleagues put together from all the individual tracks, downloaded illegally after we all discovered to our horror that the CD is out of print and for sale for something like $100 used? Shazam, it figured that one out too.

Did I just say shazam? I'm so sorry.

So it took me until the Ws to get it, but finally I got it. The sad thing is, I stumped it when I needed its helpt the most. 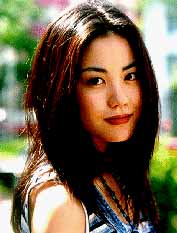 You see, several years ago, before the Hong Kong handover, I was sitting in a hotel room in Seoul, watching television. I do not speak Korean, so I settled on an Asian Pacific version of MTV, where I discovered Faye Wang, queen of Cantonese pop, singing a rendition of a Tori Amos song. During the weeks I spent in Hong Kong, I heard this song again and again, and I got completely addicted to the sound of Faye's lovely voice, and I loved the way she turned a completely familiar song strange by singing it in yet another language that I do not speak.

So when I got home, I looked for albums of hers, with no luck of course. Then I became even more captivated by her in Chungking Express. Then finally, I stopped in an Asian video store, next door to one of my favorite Asian grocery stores in Ann Arbor. There she was! So I bought a CD. It does not have the Tori Amos song on it, but it does have "Here's Where the Story Ends" and "Dreams," hauntingly like and unlike the Sundays and the Cranberries.

The trick is, all the text on the CD jacket is in Chinese, and despite my attempt to learn to read Chinese in two years of study, I just can't hack it. So I thought, help me Gracenote CDDB, you are my only hope.

I'm impressed you made it that far before trouble hit. I have this funny feeling that I'm going to end up burning out my drive before I finish my project.

So my two nosy questions today:

* Stats? How many CDs are you ripping, and how much hard disk space have you consumed doing so?

* What are you planning to do about liner notes? I have taken to annotating my jazz tracks with the list of personnel and recording dates, when I can get them, but classical recordings have a whole nother level of complexity. What's your solution for managing that data?

* Where do I find a copy of the Dog Faced Hermans "Every Day Timebomb" on CD? It's not available in online downloadable form anywhere that I can find... (That last is because I'm trying to reconstruct a 12-year-old tape I got from you, and that song and the ee cummings spoken word stuff are the last standouts that I haven't found in digital form.)