Another year, another year-ending celebratory mix disc. As I did last year, I made my mix of things I discovered this year--though not all were released this year. In this sense, it is a chronicle of my musical year, moreso than the musical year that was.

America Is Waiting
For My 2008 Mix.
Brian Eno and David Byrne, “America Is Waiting,” My Life in the Bush of Ghosts (1981; Nonesuch, 2006).
How did I miss this re-release in 2006? So I start my compilation with an acknowledgement that I can be woefully behind the times. So it goes! This album still sounds as incredible as it did when I first heard it on the crappy cassette deck of my first car, and even then it was already almost 10 years old. Even if you have this album on some other format, it is worth buying the CD for the liner notes’ detailing of the working process that went into making some of the most innovative music of its era. NB: sampling, in those days, was a more intuitive and analogue process. Also note the excellent vintage photos of Eno and Byrne. Those were the days.

Kassin+2, “Ponto Final,” Futurismo (Luaka Bop, 2008).
This “Samba Supergroup,” as Rolling Stone describes them, is Moreno Veloso, Domenico Lancelotti, and Alexandre Kassin, and their sound is somewhat tropical, somewhat electronic, and altogether groovarific. This disc is part of a three-part “+2” series, each disc featuring one of the band members in the title role. Kassin has has produced records by singers like Marisa Monte and Bebel Gilberto and made an album from the bleeps of a Gameboy. About this song, Kassin says, “The song has a classical theme. The singer says, ‘I don’t want you. It’s over.’ At the same time he’s singing about how he wants to be smarter, and he wants to get in shape, and he wants to have a new life. It’s about wanting what you haven’t got.” 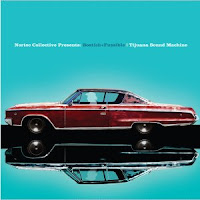 While we are thinking about genre, this album's MySpace page denotes this disc as "Psychedelic/Concrete/Electronica." I personally am not clear on where the boundaries of "Concrete" end and "Psychedelic" begin, but the sound here is cool, coming out of Tijuana's electronic scene. If you know Nortec Collective, then you might recognize Bostich and Fussible from their series of Tijuana Sessions albums. Bostich and Fussible are not exactly people or bands, but rather the noms de turntable of Pepe Mogt and Ramon Amezcua. What is there not to like about this album's blend of accordions, tubas, trumpets, norteño percussion, vocoders, drum machines and synthesizers? This song will make you wish you were driving around in the car on the album's cover, instead of whatever clunker you find yourself cranking the track in.