You're right: it is not really Thursday yet.

Several years ago, when I was spending the summer in Roma, I went to a restaurant (not far from the Campo dei Fiori) with friends. The woman who owned the restaurant explained the specials to us, listing off several delectable items, and ending with, "e gli gnocchi, perchè oggi è giovedì"--and gnocchi, because today is Thursday. I ordered them, of course, but I thought, What is so special about Thursdays and gnocchi? Is there something Romans know about Thursdays that I don't? And how long will it take me to learn it? We pondered this at length over dinner, and very quickly "Perchè oggi è giovedì" became a catch-all explanation for many otherwise inexplicable things.

Two years ago, over Christmas, my mother and I made gnocchi. She had made them before, with friends of ours from home who used the authentic recipe of a particularly culinarily talented grandmother, and they were always a treat to eat. But I had never made them. We tried using Mario B's recipe which called for a 2:1 ratio of potatoes:flour, as well as the inclusion of an egg and some oil.

We knew, though, that there was something wrong with this recipe, because surely making gnocchi is not supposed to take all day. We vowed to make them monthly, so that we could get the hang of it.

We did not do this.

In fact, I have not made them since then, until Christmas Eve. This time we started with Marcella Hazan's recipe, on the theory that everything I have ever made from her cookbook has been perfect and reasonable. But we consulted numerous other cookbooks, too, finally concluding that to her 1 pound:1 cup::potatoes:flour arrangement we should add salt (1 teaspoon for 3 pounds potatoes) and one egg. Marcella says the egg can make the dough tough, but that sometimes its omission can lead to a gnocchi disintegration disaster (not her words, more's the pity). We decided that risking the former beat risking the latter.

THIS WAS SO MUCH EASIER. Indeed, boiling the potatoes was the biggest part of the process, but that allowed time for extensive research in the cookbook library. Then after some peeling of hot potatoes, and running of hot potatoes through the food mill, we added most of the flour, added the egg, and started to make the dough.

Things became dough so quickly! Not like last time when we thought we had moved into a potato glue factory.

Here is the dough being rolled into little snakes: 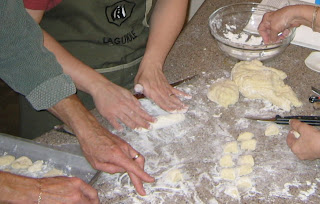 Here is a dough snake being cut into little globs: 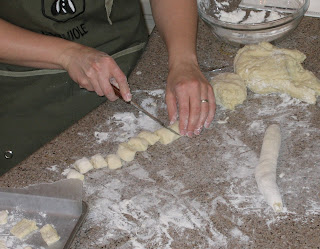 Here is NOT the authentic forking technique, but the technique that my friend's culinary grandmother prefers: 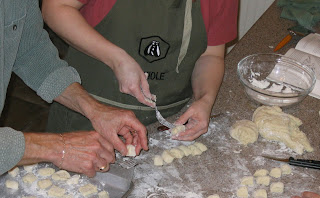 I prefer the authentic technique, where you roll each gnoccho over the tines of the fork, but the PP did not get a picture of that.

Here they are, ready to go in the boiling water: 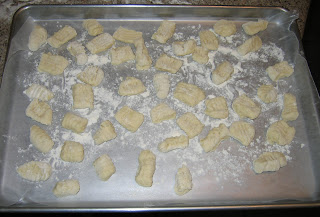 I made two sauces, one the traditional sage butter sauce, and the other an olive-oil based conglomeration of prosciutto di Parma, toasted pine nuts, olives, and sundried tomatoes. The latter was very tasty, but the former was a bit better suited to gnocchi, because it adhered better to the little grooves.

I like the new look! And I lurve gnocchi. You are doing good things! Yay you!