How do we respond to this news from the BBC (via truthout), of evidence suggesting a plan on the part of the Bush campaign to disrupt voting in Florida's African American voting districts? 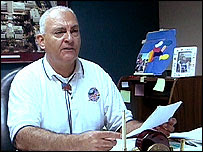 A secret document obtained from inside Bush campaign headquarters in Florida suggests a plan - possibly in violation of US law - to disrupt voting in the state's African-American voting districts, a BBC Newsnight investigation reveals.

Two e-mails, prepared for the executive director of the Bush campaign in Florida and the campaign's national research director in Washington DC, contain a 15-page so-called "caging list".

It lists 1,886 names and addresses of voters in predominantly black and traditionally Democrat areas of Jacksonville, Florida.

An elections supervisor in Tallahassee, when shown the list, told Newsnight: "The only possible reason why they would keep such a thing is to challenge voters on election day."


Do we cheer that this potential scheme has been uncovered before the election, perhaps in time to do something about it? Or do we shiver that more such potential schemes might be out there than could be uncovered?